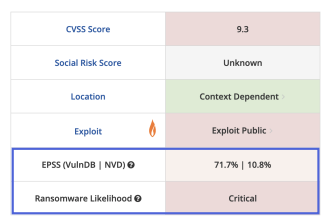 With tens of thousands of vulnerabilities disclosed every year, security teams struggle with resources to remediate.

Prioritizing vulnerabilities is one of the most important tasks vulnerability management teams should focus on to eliminate the most critical threats and risk from the organization.

Weaknesses found in hardware and software coupled with an exploit allow attackers to infiltrate an organization either directly or through the use of known malware as part of ransomware operations.

As we know, ransomware continues to be a big challenge and pain point for organizations across industries.

Staying in front of the latest vulnerabilities and knowing which ones ransomware groups are using is key to prioritization and ensuring teams are focused on the vulnerabilities most likely to have a negative impact on your organization.

The model takes a newly published vulnerability and using predictive analysis, determines the likelihood that it will be used in future ransomware operations.

Flashpoint’s EPSS model elevates exploit prediction to the next level, as it runs against the entire VulnDB dataset which includes all vulnerabilities, not just ones with CVE IDs. 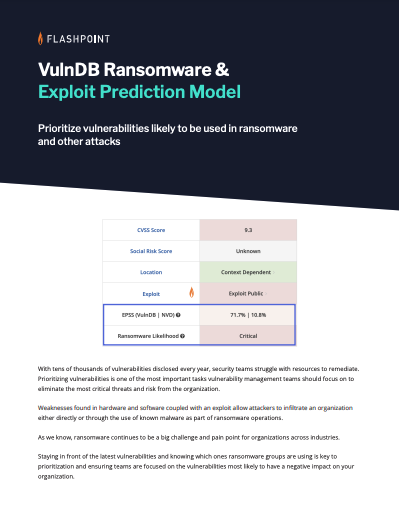