Aflac is a Fortune 500 company with headquarters in Columbus, Ga. - providing financial protection to more than 50 million people worldwide. When a policyholder or insured gets sick or hurt, Aflac pays cash benefits fast. For six decades, Aflac voluntary insurance policies have given policyholders the opportunity to focus on

Aflac has also been a Flashpoint customer for nearly two years. We recently spoke with DJ Goldsworthy, senior manager of Threat and Vulnerability Management at Aflac, to learn more about his experience leveraging Flashpoint intelligence to support Aflac’s goals and challenges.

Aflac’s top priority is to remain as informed and protected from potential threats and vulnerabilities as possible. However, the company’s large, widely distributed workforce of about 9,500 employees along with proprietary access to sensitive data, reliance on numerous critical systems and infrastructure, and a vast network present complex and countless challenges. Accurate, timely detection of potential incidents

requires the Aflac team to keep ahead of the curve on everything from macro trends – such as shifts in threat actors’ tactics, techniques and procedures (TTPs) – to atomic indicators of emergent malware, compromised credentials and physical threats.

Aflac’s Threat and Vulnerability team also plays an integral role in supporting the company’s bottom line. Aflac is known for its quick support and delivery of payment for its clients; therefore, it is even more critical that the company diligently protect itself from compromise or fraudulent activity.

Initially, Aflac’s approach to threat intelligence was heavily focused on identifying indicators of compromise (IOCs). The company relied on a combination of open-web, third-party and government sources such as paste sites, VirusTotal and automated feeds. However, the Aflac team realized additional intelligence was needed from the deep and dark web. In response, the Threat and Vulnerability team sought out vendors to support a broader threat intelligence mandate that would provide the level of tactical and strategic operational intelligence to inform decisions on how to adapt defenses to rapidly changing threats.

According to Aflac’s DJ Goldsworthy, senior manager of Threat and Vulnerability Management: 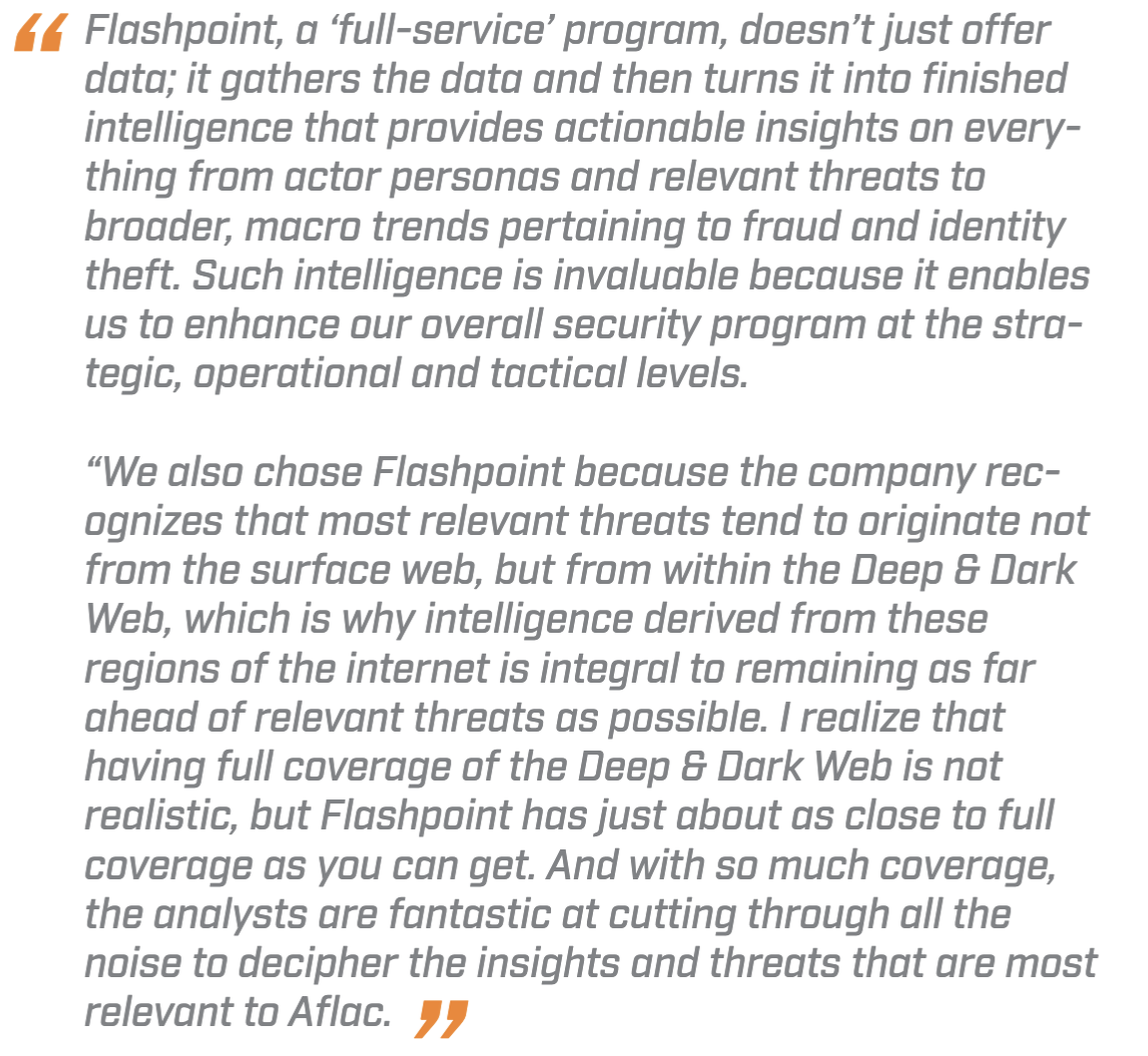